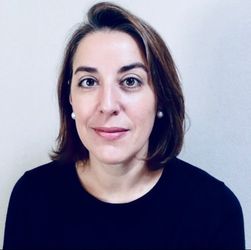 Ana Maria Candela, Ph.D. is a historian of Modern China and historical sociologist. Her research focuses on Chinese migrations to Latin America and on the global dimensions of Chinese history and China's social transformations. She teaches Introduction to Sociology, Black Lives Matter, Settler Colonialism, Post-Socialist China, Global China, Gender and Chinese Society, Chinese Migrations, the Pacific, and Nationalism. She is the recipient of several distinguished awards, including a National Endowment for the Humanities Fellowship and a Chiang-ching Kuo Foundation Scholar Grant. She has also been a fellow at the Institute for Advanced Studies in Nantes. Her most recent work was published in Critical Asian Studies, the Journal of World-Systems Research, and ​Inter-Asia Cultural Studies.

Her current book project, Intimate Others: Peruvian Chinese Between Native Place, Nation and World, 1870s-1940s examines the translocal history of Chinese migration and settlement in Peru during an era of expanding industrial capitalism, settler colonialism and nation making. Moving across the Pacific at a moment when migrants and elites in Asia and the Americas imagined settler colonialism modeled on Anglo-Saxon practices as a force of progress, Chinese ventured across the Pacific to the Americas in pursuit of new opportunities. Intimate Others explores the diasporic world Cantonese migrants made by examining the translocal practices and imaginaries of belonging between native place, nation and world forged by two generations of Cantonese Peruvian elites from the late-1800s to the Present.

Cantonese merchants with ties to transpacific commercial firms in Hong Kong moved to Peru in growing numbers from the 1880s to the 1920s, expanding Cantonese migrant networks into the northern coastal and interior frontier spaces of Peru. By maintaining translocal ties to their native places and to Chinese communities across the Pacific, they participated in the making of a broader Cantonese Pacific world and crafted modes of belonging situating themselves as cosmopolitan merchants, settler colonists and revolutionary nation makers who could help China and Peru overcome the underdevelopment imposed by Euro-American imperialism and colonialism.

Facing rising Yellow Peril fears and exclusion acts, a new generation of tusán (Peruvian born Chinese) intellectuals emerged during the 1920s to 1940s to transform the meanings of being Chinese in Peru. Embracing indigenismo, mestizaje and Latin American hemispheric politics alongside Chinese wartime patriotism, tusanes embraced new cultural, racial, gendered and spatial strategies for defining themselves as Peruvian Chinese. As World War II gave way to the Cold War, Cantonese merchant elites reconfigured native place networks towards Hong Kong, Macao and Taiwan as sites of national and native place belonging while their tusán offspring expanded their connections across the Americas, repositioning the Peruvian Chinese community within an Asia-Pacific-Americas “free world.”

In the contemporary era of expanding Asia-Latin America ties, Peruvian Chinese face new pressures to reconfigure their notions of being Chinese in relation to a rising Global China, giving way to a new set of creative efforts to redefine what it means to be Peruvian Chinese between native place, nation and world.